Arriving in a new country and finding a job may be a daunting task. This is all the more true for refugees, who often have to leave their country without being able to carefully prepare their departure, and spend months, or years, waiting for their asylum request to be processed. Even after obtaining the status of refugee, finding a job remains a serious difficulty. This report is based on linked administrative longitudinal data from the National Register and the Data Warehouse Labour Market and Social Protection and studies the socio-economic integration of beneficiaries of international protection (which can either be a refugee status or subsidiary protection) in Belgium during the period 2001-2014 (36,540 persons). The researchers compare cohorts of people that were granted international protection in the periods 2001–2006, 2007–2009 and 2010–2014, to evaluate whether the labour market participation of more recent cohorts improved relative to earlier cohorts.

Five years after being granted international protection, 37[KD1] % of the 2001−2006 and the 2007−2009 cohort was working. For the 2010−2014 cohort this share was only 29%. While this share is relatively low, it continues to increase after 5 years. By means of a comparison: after 10 years, about 50% of the people who obtained an international protection status in the period 2001−2006 was working. The share of people who ever worked is also much higher than the share of people working at some point. For instance, 81% of the 2001−2006 cohort has worked at least during one period [EM2] by 31 December 2014. Hence, the majority of the people has worked (in a formal job) at one stage during their stay, despite the fact that the population obtaining international protection is a vulnerable group. However, first and later employment episodes last on average less than one year, pointing to rather short labour market episodes and high employment instability. Hence, durable labour market integration remains a point of concern. 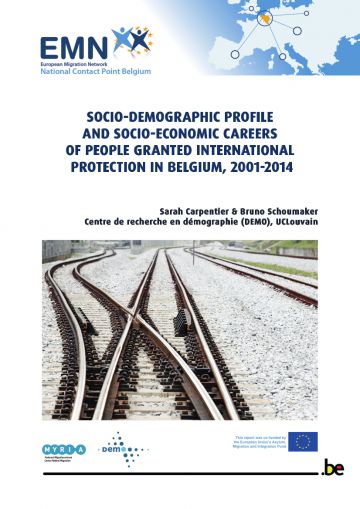 Parallel report for the Committee on the Rights of the Child

Parallel report by the Combat Poverty, Insecurity and Social Exclusion Service, Myria and Unia, on the fifth and sixth periodic reports submitted by Belgium pursuant to article 44 of the Convention on the Rights of the Child