Myria, the Federal Migration Centre and independent national rapporteur on trafficking in human beings, is publishing its public and independent annual report in English today: Behind closed doors. With a focus on the exploitation of domestic workers, it also pays special attention to the impact of the health crisis on the fight against human trafficking. Aimed at the Government and Parliament, this report provides an impetus and offers support to the relevant stakeholders.

As a result of the COVID-19 pandemic, the title Behind closed doors has an extra dimension. Emphasis is placed on the exploitation of domestic workers at a time when those working in a context of modern slavery are more than ever condemned to perform their services and live under the same roof as their employers. Such cases of human trafficking occur among private domestic workers and diplomatic domestic staff.

The report highlights three key areas: the need to raise awareness among the general public, the special attention that needs to be paid to diplomatic domestic staff and the COVID-19 aspect.

PART 2: Evolution of the phenonmena and the fight against the trafficking and smuggling of human beings

Cases of human trafficking in private homes mainly concern domestic workers employed outside any legal framework. These victims usually don't have a residence permit. They are often alone and don't speak French, Dutch or English. It is particularly difficult to detect them precisely because of their isolation.

Raising public awareness about the signs of abuse increases the likelihood that frontline services will receive more reports, especially from neighbours, individuals and civil society.

It is also important to raise awareness among potential employers and domestic staff about the existence of human trafficking, its consequences and how to prevent people from becoming victims.

2. Improving monitoring of the potential abuse of diplomatic domestic staff

Diplomatic domestic staff belong to a special category of domestic employees. These workers are even more vulnerable because of their employers' immunity and their position of power (even with regard to their families in the country of origin).

These workers receive a special diplomatic identity card through their employer, which they collect or renew in person at the Protocol Directorate, FPS Foreign Affairs. Before a worker travels to Belgium, the employer and the worker conclude an employment contract for domestic staff, which is executed in Belgium and subject to Belgian labour law.

A standard employment contract is available from the Protocol Directorate, FPS Foreign Affairs.

Myria recommends that the Protocol Directorate of FPS Foreign Affairs effectively and systematically interview domestic workers when the special identity card is issued or renewed in order to prevent or detect possible abuses. Furthermore, the indicative salary scales in the standard employment contract for diplomatic domestic staff should be regularly updated.

3. The coronavirus and human trafficking

During the coronavirus crisis, the specialised centres for victims of human trafficking sounded the alarm because very few victims were reported. They fear that many victims have gone undetected.

Regarding cases of labour exploitation, working conditions in sectors at risk of human trafficking, such as construction, horticulture, car washes and nail bars, often involving foreign workers who may be employed illegally, also present a major health risk. The measures against COVID-19 aren't always or aren't sufficiently applied. Besides the social inspectors from the ECOSOC units of the National Social Security Office (NSSO), (general) 'corona' checks are also carried out by frontline services, which aren't competent in the area of human trafficking and have little or no relevant expertise. Nevertheless, it is important that these other inspection services pay sufficient attention to indicators of human trafficking during their checks in high-risk sectors and receive appropriate training. When they detect a situation of trafficking and identify presumed victims, they must inform the social inspectors of the NSSO's ECOSOC units in order to take appropriate measures and launch an investigation. ECOSOC must therefore benefit from more resources and staff.

In the case of sexual exploitation, it is important that the police and the judiciary continue to carry out the necessary checks to detect victims of human trafficking, and that they are provided with the essential resources. They should also be made aware of the need to carry out more checks on dating sites dedicated to private prostitution, which escape coronavirus-related checks.

The report also presents the most recent figures (2019): 145 new victims of human trafficking received support from a specialised reception centre (significant increase compared with 2018). 60% of them were subject to labour exploitation, 36% sexual exploitation, 2% exploitation of begging and 2% were coerced into committing offences.

Myria therefore reiterates that the fight against human trafficking must remain a constant priority at all political levels, in the field, among the judiciary and in Parliament. It welcomes the fact that the fight against human trafficking and assistance to victims, as well as the reinforcement of the resources allocated to the police, the inspection services and the judiciary, are among the priorities of the federal government. It hopes that these points of the agreement can be effectively implemented. 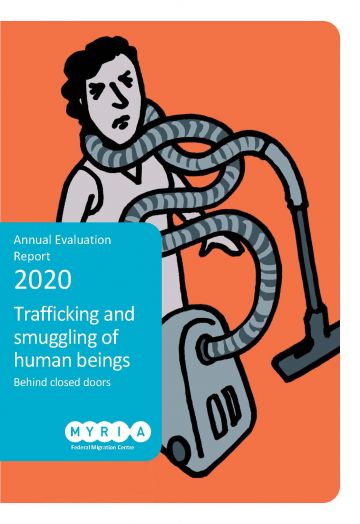